The exhibition entitled The Palace of Concrete Poetry presents an intergenerational dialogue between artists who are closely or more loosely related to the notion of concrete poetry, formed in the late 1950s and the 1960s. This international interdisciplinary movement grew out of the need to redefine poetry and the field of playful experimentation at the intersection of literature and the visual arts. The exhibition brings together both the pioneers of concrete poetry (Bohumila Grögerová, Susan Howe, Ferdinand Kriwet, Ewa Partum) and their followers (Pavel Büchler, Keti Kapanadze, Janice Kerbel, Jan Šerých, Sue Tompkins), including the youngest generation (David Horvitz, Barbara Kapusta), moving the issue forward to (post)digital ways of working. The works on display, with a few exceptions, were created specifically for the exhibition and are situated in the Art Nouveau interior of the Writers’ House of Georgia in Tbilisi, one of the architectural gems of the city.

The exhibition is held under the long-term Czech project Ora et Lege (Pray and Read), which seeks to promote a critical dialogue between contemporary art and the Benedictine Order and the Catholic faith in general. Ora et Lege is also a unique project thematically focused on the work of contemporary visual artists with text. From the very beginning, it has been conceived as a small biennial with the main exhibition in the Broumov Monastery in Eastern Bohemia (next one to be held in 2023), while in the “odd” year there will be lectures and exhibitions abroad. The exhibition prepared for the Writers’ House of Georgia in Tbilisi goes back to the roots of Christianity and is inspired by the story of the creation of the world, which is common to both religions, the Catholic Church and the Georgian Orthodox Church.

The exhibition The Palace of Concrete Poetry is loosely inspired by the answer of the Czech artist Bohumila Grögerová to a question about the origin of spiritual impulses in her experimental poetry. Grögerová quoted the famous prologue of the Gospel of John, which reads, “In the beginning was the Word, and the Word was with God, and the Word was God.” She added, “Language, then, according to the Bible, precedes creation, and that which is not named is not created.” Grögerová went on to mention the existence of taboo words that cannot be spoken for many different reasons (social, religious or political), as well as words that are spoken in times of greatest need as a plea for hearing or help. Grögerová’s statement revealed not only her religious convictions, but also reminded us of the existence of words that are difficult to classify, are “forbidden” or preferably are not pronounced at all. The exhibition The Palace of Concrete Poetry thus touches on language, which is not just a combinatorial tool, but a living organism subject to many circumstances. The thing on display is the “word”, which is further manipulated within concrete poetry as a linguistic material. Its semantic values are placed on the same level as its visual, material and sound parameters. Concrete poetry appears in the form of typewriter art, in the visual work with typography, or in the form of installation or performance decomposing words into individual characters. Many of the realizations devalue language to varying degrees to emphasize the loss of its informational relevance due to external interventions. They deal with the issue of politically or religiously authorized language and the possibility of its misuse to legitimize a certain system. Other works explore the inability of language to capture extra-linguistic reality, exacerbated by the transformations in the ways we write as a result of new technologies and the digital world.

The project is organized in collaboration with Writers’ House of Georgia and E. A. Shared Space. The exhibition is part of the official accompanying program of the Tbilisi International Festival of Literature (9 – 11 September 2022) and the Tbilisi Art Fair (22 – 25 September 2022). 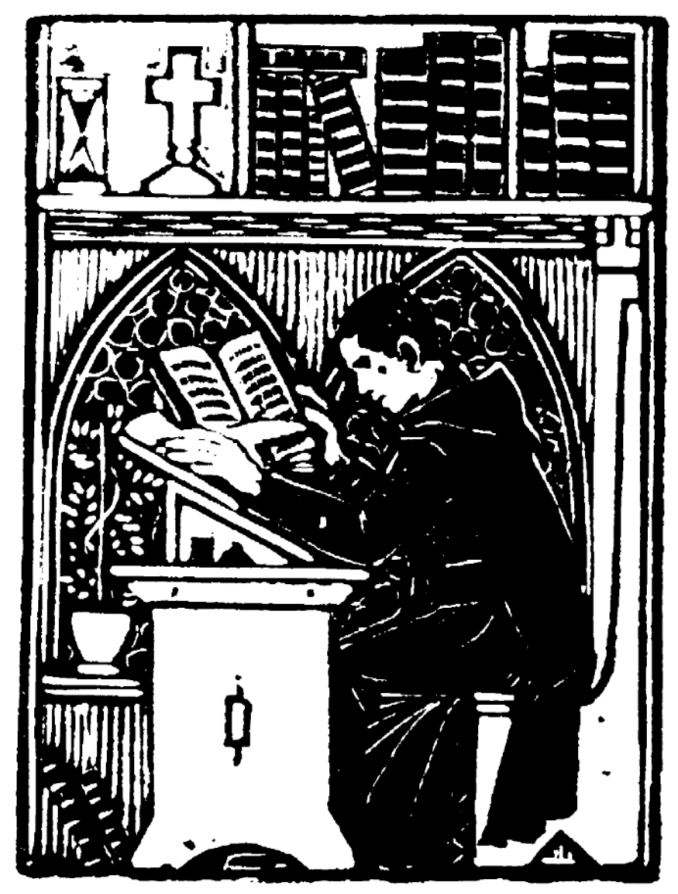 The picture comes from an unknown author and is taken from the Emmaus Benedictine magazine Pax, 1929, vol. 4, p. 162. It was used, even in other years, as a graphic separation of individual articles. Original dimensions: 37 × 28 mm.

The exhibition is organized by the Broumov Educational and Cultural Centre, a non-profit organization founded in 2013 by the Broumov Region Development Agency. Through cultural, educational, and community activities, the agency helps to promote the life of the Broumov Monastery, a national cultural monument, and is a celebrated European institution that encourages creativity, self-confidence, and tolerance.

The Palace of Concrete Poetry
Writers’ House of Georgia, Tbilisi